With this in mind, I am highlighting here some of the vital elements of Michael Brown's killing. So much of this is drawn on the brave reporting and lived experience of others. It's vital that you to go to the links, follow the twitter accounts, and actively support the folks I link to below. 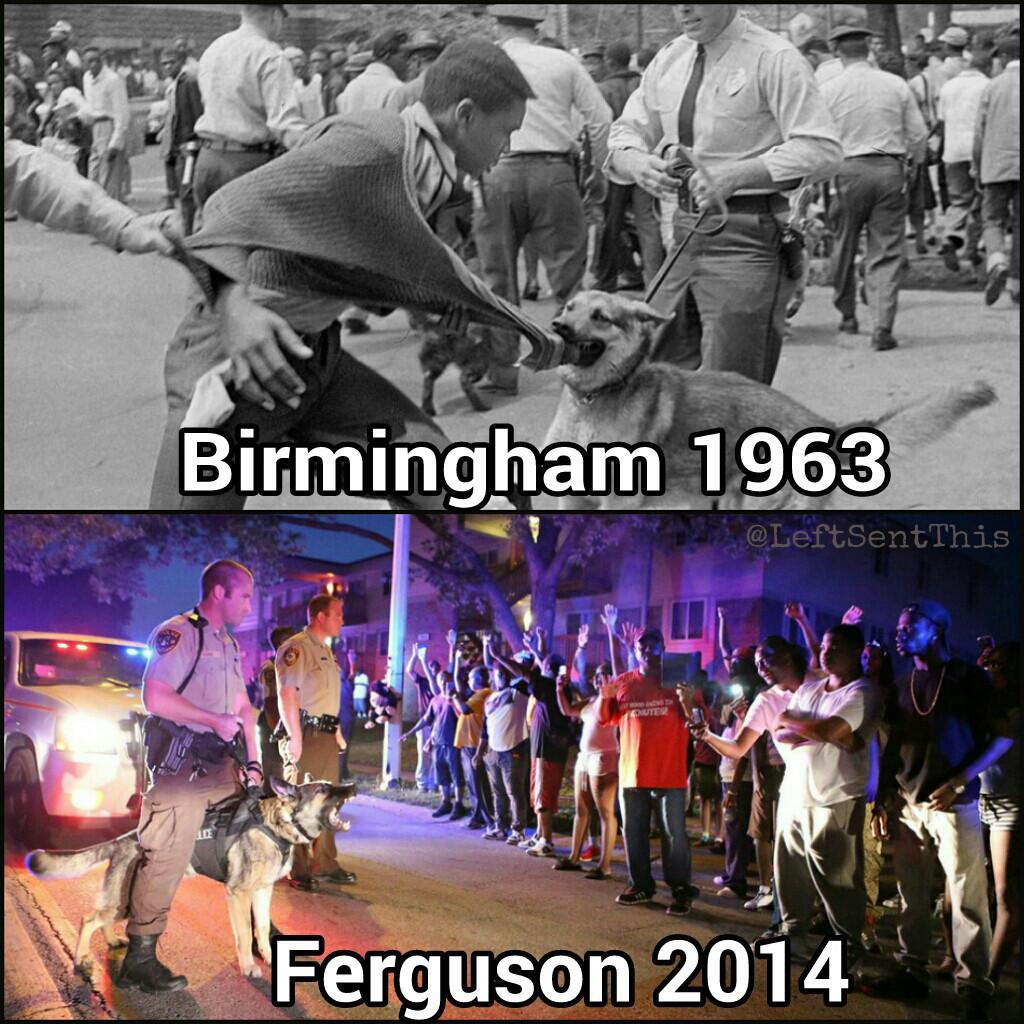 This is about the killing of young black man. He was not a suspect. He was walking down the street. Multiple independent and unrelated witness describe that he was shot multiple times from a distance with his hands up in surrender. No ambulance was called to the scene. Instead, the officer call in to dispatch for more officers, cars, and K-9s to be brought in from multiple precincts. Increased police presence incited anger and agitation, even as Michael Brown's was left on the street for hours (see this excellent video report).


Ferguson police declined to interview witnesses (but sure to listen to their testimony yourself). No incident report has been released for the shooting. The situation quickly escalated when police called in M-16s, armored trucks, tanks, tear gas, rubber bullets and pepper shots (not days later, but within hours of the shooting...before any violence from the crowd).

Each evening, once the media packed up to go home, protestors became the targets of increased police violence. The morning news showed the protester aftermath and response, but not the police instigation of it. By Wednesday, increased media coverage revealed what the residents of Ferguson had been dealing with all along (another important video here). Even then, the media has been actively prevented from fully covering the police action in Ferguson.

Shortly thereafter, events seemed to take a turn for the better. Capt. Johnson showed a completely different approach by removing the riot gear and marching with the protesters. It set an entirely different tone. The protesters were the same, the anger was the same, the demands were the same. The police behavior changed and the situation drastically deescalated. But still no answers about Brown's killing.

The next day, there was a press conference to release the name of the cop who killed Michael Brown. They did so, but rather than releasing an incident report about cop Darren Wilson and the shooting, they released one of Brown allegedly shoplifting earlier that day. Instead of pictures from the crime scene, they showed footage from the shop's security camera. It was nothing short of character assassination of the victim.

As it turns out, Officer Wilson's approaching Michael Brown had nothing to do with the earlier incident. The videos from the convenience store are complete inadmissible in court. And police knew it. But the media coverage had already been effectively hijacked. But the court of public opinion? The biases of a jury? The perpetuation of victim blaming? The media? The video is still admissible for all those things. The narrative was crafted.


Thus, after four days of peaceful protest, the crowd was re-instigated. @thetrudz notes that "It takes a lot of practice to face the but of a gun and not physically defend yourself. They are learning as they go while under military siege...When someone harming you, the common reaction is physical self defense, if able. [Civil Rights Movement; CRM] activists were trained how not to react. This is hard...CRM had months of planning/training." (See also, The Cross and the Molotov Cocktail). 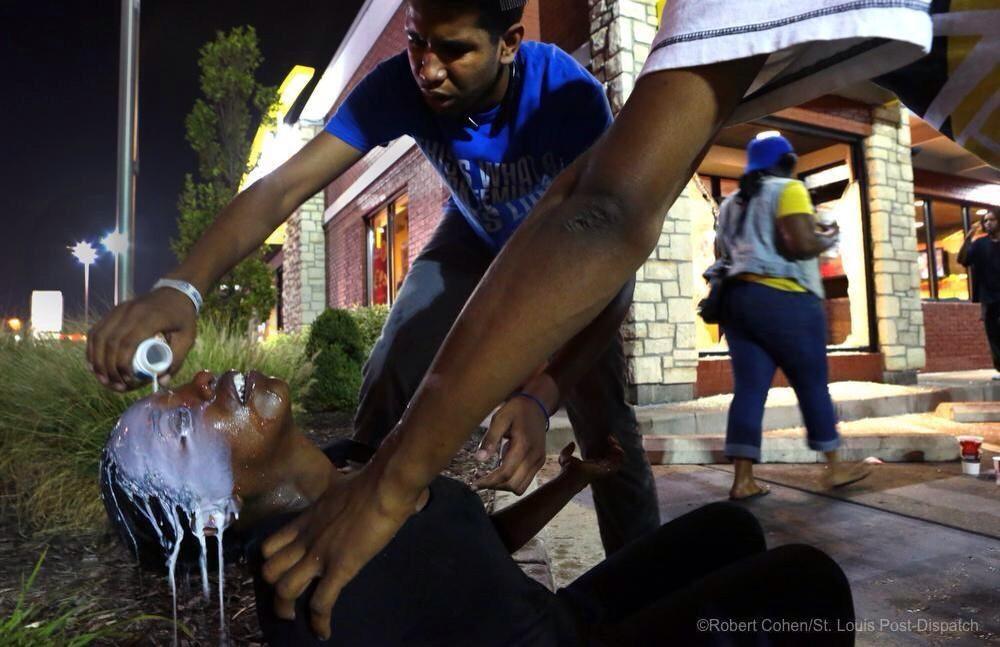 Over the weekend, curfews were imposed at midnight to stop the protests and to send the media home. These were intentionally violated as acts of civil disobedience and in a statement of free speech. Sunday evening, police fired tear gas, rubber bullets, and sound cannons into crowds with little to no warning. This was hours before the curfew was supposed to be in effect. Children were in the crowd, and were hit. Media were threatened. Residents used milk from McDonalds to treat victims' burning eyes. Monday morning the news described it as looting. The police said they were responding to  gunfire. It turns out it was fireworks.

Amnesty International has sent a delegation to Ferguson, the first time they have ever done so in the United States. Meantime, a private autopsy was released showing Michael Brown was shot six times. Several at long range (including into his palms), and some at short range (including the top of his 6'4" head).

For now, we're in a holding pattern. Each day continues a vicious cycle in which frustrated citizens are antagonized and frighted. They react. The police wait, do nothing to remedy the specific incidents of vandalism or disorder (the citizens are left to handle that), and then move in en masse against the entire crowd with tremendous force. The cycle continues. If things calm down in Ferguson, it will be because of the efforts of the clergy and key leaders in the protest, not through any of the aggressive actions of the police


There are many aspects to this story.
The criminalization of black bodies plays into this.
This is reflected in fact that Michael Brown can be on trial for his own murder. That the surveillance videos can be used to imply that his killing was justified. White mass murderers are arrested, but a black boy will be shot on sight for walking in the street. Black victims will have their criminal records examined, their academic grades questioned, their parental upbringing challenged. It requires overcoming tremendous odds to prove to public opinion that a black victim did not deserve to be killed.

Earlier this month, John Crawford III was killed while holding a toy gun  in a Walmart in Ohio (an open carry state). He called out "it's not real," but it didn't matter. Meantime, white folk walk through Target with real assault rifles. And can you imagine what would happen if the protestors in Ferguson showed up like these guys? The double standard is extreme. And it's costing lives. The media and police can't (won't) differentiate between black/Brown bodies that are peacefully protesting and those of their criminalized stereotypes. Will you?

White media bias plays into this.
Newsrooms are overwhelmingly white. Given well-established white undereducation about race, what makes us think they are qualified to cover these stories? Many are quick to suggest a black reporter might be biased. That itself reveals our own prejudice. Because dominant society considers a white perspective to be a 'default' and neutral stance, half the story is missing.

Social media is often deemed untrustworthy, but in the absence of reporters, this is how most of the videos, images, and evidence has been made public. When mainstream media went home, or was turned away, this is how we heard what was going on. These platforms allowed individuals to get the word out, by providing access and amplification of Black voices that wouldn't otherwise exist.

History plays into this.
All of this has happened before. The immediate decision to use riot gear and German Shepherds demonstrates the gross and callous insensitivity of the Ferguson police. And it has all been explained before (see Tupac Shakur and Malcolm X--the latter’s example played out again almost exactly in Ferguson in 2009). When Civil Rights history is glossed over in white schools and white society, the result is an uninformed, uncontextualized view of current events. We perpetuate the same violence we have been committing against Black neighborhoods for decades. This is the context for Ferguson. It's this sort of police behavior that Black citizens have dealt with years. And then Brown was shot.

White silence plays into this.
If your family, community, or church has not consistently done the work of discussing and dismantling systems of racism, do not be 'shocked' when events like these occur or when white churches stay silent. How many white onlookers felt Brown's killing was being blown out of proportion? How many saw the protests as an overreaction? After so many calls 'to wait to get the facts,' from sources white folks could 'trust' (read: non-black sources), it turned out the facts were even worse than we feared. The more we hear the worse it gets. And in the meantime, the citizens of Ferguson have been struggling on their own.

Drew Hart reminds us (through Dietrich Bonhoeffer) that "the church was mute when it should have cried out, because the blood of the innocent cried out to heaven." Instead of sanctimoniously saying "wait, wait" (as the white clergy did in Birmingham), listen to the lived experiences of black folk that tell us the reality of the world in which we live.

Laila Lalami notes "If you want to learn about privilege in this country, you only need to ask who gets the benefit of the doubt." Take note when your mind says "yeah, but..." or "we need a balance" or "we should get the full story." Consider where these instincts come from, and in whose favor they likely are. Who does your instinct tell you to believe? Who is it your instinct to correct? Are you more likely to be directing your critiques at the oppressed or the oppressor? Do you actually want peace? Or just quiet?

Don't be tricked into thinking you're playing 'devils advocate,' when you're simply reiterating the position of power and maintaining the marginalization of the oppressed. Instead, be skeptical of your reactions. We live in an "intensely physically segregated country." White folk that believe police treat black and brown people fairly, aren't around enough to notice. Christena Cleveland notes (through MLK) that "it is hardly a moral act to encourage others patiently to accept injustice which he himself does not endure." You have a choice. Who are you going to believe? The oppressed or the oppressor? The powerful or the powerless?

Sure, there are complexities and caveats. But those aren't the voices that need amplifying--they're already getting plenty of coverage. Many of us only get our news from the seats of power. Media that is operating under the assumption of a post-racial world. Media that arrives in with preconceived notions of who is violent and who is in the right.

At the center of it all, it's still about Michael Brown, a young man who was killed in cold blood by a cop who has not been detained or arrested. Don't lose sight of that.

Take the time to read the links above. He's worth that. The lives of our sisters and brothers deserve that. And some of us have a lot of history to catch up on.

What followed Brown's death, simply revealed to the world what Ferguson (and the rest of Black America) has known for years. Decades. Centuries. And our citizens will still be stuck with a dangerous & racist police force "protecting" them tomorrow. Black Girl Dangerous reminds us that "this happens every 28 hours. There's already been another unarmed Black person killed since Mike Brown"

Don't go back to forgetting. Don't go back to being 'shocked' that something like this could happen. Black and brown folk know they still need to be wary of police, and an innocent boy is still dead. These facts have not, and will not, change over the next weeks and months of Ferguson's story.

Khaled Bey notes that "a dead teen & a decimated community shouldn't be needed for a national conversation on institutionalized racism within police departments." If you’re just starting to listen, lament that it took yet another gunned-down boy and the militarization of a city to get your attention.

What we need now is justice. We need an official autopsy report. We need an interrogation. We need an arrest. We need a legitimate trial. We need safety for our black sisters and brothers. We need the lives of murdered restored. We don't have any of these things. Some of them we will never get.

“They dress the wound of my people
as though it were not serious.
‘Peace, peace!’ they say,
when there is no peace.”
-Jeremiah 6:14